The most important points first:

Most banks only retain only part of their customer’s money in the form of cash. The rest is being reinvested/invested in long-term investment forms, so they can benefit from the higher interest rates associated with these.

But if all customers of a bank claimed their deposits back at the same time, it is possible that the bank cannot pay all of them back.

A deposit guarantee is supposed to prevent bank runs.

This of course does not happen usually. But if the public got the impression, that the deposits at a particular bank are not secure or that there might be a bankruptcy risk – as it can happen in an economic crisis – it is indeed possible, that a huge percentage of the customers of that bank try to withdraw their deposits from that bank as quickly as possible (“bank run”). This can then indeed cause the bankruptcy of a bank.

Such situations really did occur in the past, for example in the 1930ies during the severe economic crisis in the US (“Great Depression“), which brought along the downfall of many US banks.

One of the key reasons for that was the breakdown of the stock market, which caused the ruin of many stock market investors, who in turn were not able to pay back their bank loans.

This “Great Depression” is known as the longest and most severe in the history of the USA. Between 1929 and 1933 bank customers lost 1.3 billion in deposits.

As a reaction to this crisis, then US-President Franklin D. Roosevelt implemented a division between investment and commercial banks (Glass-Steagall Act) and founded the „Federal Deposit Insurance Corporation” (FDIC).

The FDIC was furnished with an initial loan of 289 million USD and secured the bank deposits of account holders with a limit of 2,500 USD each.

As a result of the bankruptcy of the Fond Du Lac State Bank in East Peoria, Illinois, on July 5, 1934, the first payment of such an insurance sum was made to Mrs. Lydia Lobsiger.

The FDIC of the Present

Currently, the FDIC secures the following kinds of deposits of each up to 250,000 USD:

Not insured by the FDIC are:

During the time of its existence, the FDIC has already been crucially tested several times.

For example: 2008 the Washington Mutual bank became insolvent and was met by a bank run that lasted several days. In 2009 and 2010 together, almost 300 banks, whose customer deposits were insured by the FDIC, were affected from bank failure.

This did not happen at the expense of US tax payers, though, since the FDIC is not financed from tax money but from bank levies and investments in US government bonds.

When a bank faces bankruptcy, there is also the possible scenario that the bank is purchased and – for example – taken over by a bigger bank. If only a part of the bank is taken over or no buyer can be found, the FDIC steps in.

In the case of compensation, die FDIC is legally bound to make the respective payments „as soon as possible“. According to the FDIC, the goal is to carry out such payments within two business days of the insolvency of an insured bank.

For comparison: the deposit guarantee in Germany

In Germany, the deposit guarantee is mandated by law but is also being taken care of on a voluntary basis.

According to this law, the affiliation with one of the organizations for deposit guarantees is a prerequisite for a credit institution/bank (apart from the Sparkassen / savings banks , Genossenschaftsbanken / cooperative banks and Landesbanken / state banks as well as Landesbausparkassen / state buildings and loan associations) in order to be permitted for business.
The financial institutions are assigned to a statutory compensation institution depending on their category:

Sparkassen / savings banks, Genossenschaftsbanken / cooperative banks as well as Landesbanken/state banks and Landesbausparkassen/state buildings and loan associations are affiliated with so called “Institutssichernde Einrichtungen” (i.e. organization for the protection of institutions.)

The supervisory body for the statutory as well as for the “institutssichernde” organizations the Bundesanstalt für Finanzdienstleistungsaufsicht (BaFin – i.e. Federal Supervisory Institution for Financial Services).

Through the statutory deposit guarantee, the deposits of private bank customers (though not those of institutional investors, e.g. other banks) are secured in the amount of up to 100,000 EUR each, in case the respective bank is not able to pay back the deposits.

USD accounts are not protected by the German deposit guarantee (neither in Germany nor elsewhere in Europe!

Deposits in other European currencies are protected as well, though not CHF and USD.

Not guaranteed by the statutory deposit guarantee (since they are not considered deposits) are: 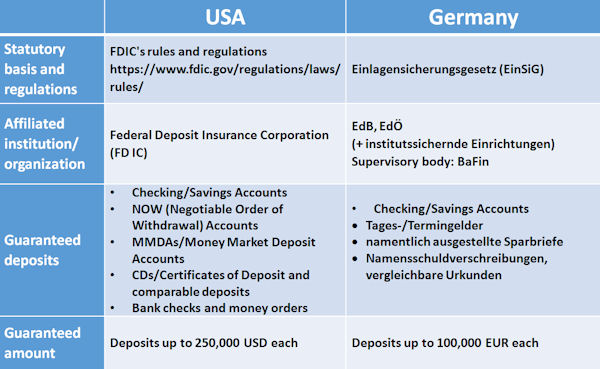